Since a while, rumours about the end of the CC72000-hauled intercités trains between Paris and Belfort are being whispered among railfans. Considering the distance from my home, it’s actually a small shame that I didn’t have any photos of these services yet… hence the decision in autumn 2014 to head in the direction of Vésoul to collect some pictures.

Situation at the time of the trip

As of the moment of the trip, the better days of the locomotive hauled Paris – Belfort passenger trains are nothing but a legend anymore. Surprisingly, Saturday and Sunday are the busiest days to see these trains. All of them are pulled by a modernized CC72100 locomotive.

The railway line itself is in good shape: infrastructure allows speeds of up to 160 km/h. On a lot of places you can still breathe the atmosphere from way back, though… including telegraph masts between Culmont-Chalindrey and Belfort. Becoming a rarity, it is no surprise that most pictures you see are from the latter section of the line. The section north of Culmont-Chalindrey also has some interesting locations to offer, though.

Beware, though, not all trains continue to Vésoul. In order to get the most out of the limited amount of time, a lot of driving back and forth was required.

Below is a detailed report of the 5 days spent on the line during the month of October.

This day consisted of a lot of driving, with only one stop to check out the legendary Orient Express that was detoured through Belgium. My first goal was Luzy-sur-Marne, just south of Chaumont. I arrived with sufficient margin to explore the Marne – Saône canal and set up the gear at Poulangy for train 1745 to Belfort, which came after only a couple of minutes waiting. Here it is seen passing over one of the many locks of the canal. 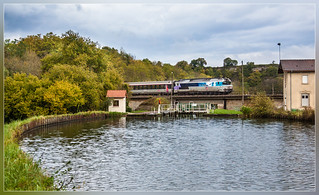 Darkness was filling the smoothly sculptured Marne valley, but train 1848 to Paris was right on time to still make use of the beautiful evening light. Scene of the picture is the Marne – Saône canal at Luzy-sur-Marne, a few minutes before halting at Chaumont. 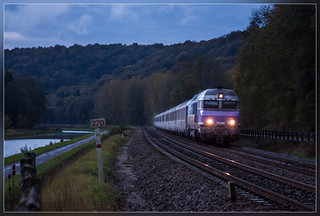 Eating in Chaumont isn’t worth mentioning on a Sunday evening, so before heading to my hotel I decided to spend some time at the station to check out the 2 evening trains: 11841 to Culmont-Chalindrey (pictured below) and 1843 to Belfort. 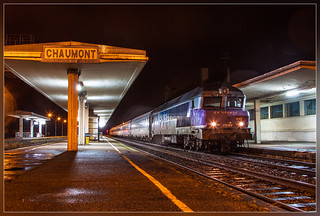 Armed with a map and the knowledge that weather before noon wasn’t going to be great, I found the below spot not too far from the hotel. The line peeps out between 2 tunnels while crossing the Marne – Saône canal. Pictured is train 1742 to Paris. 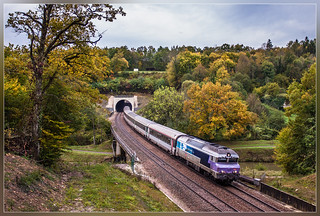 Between trains 1742 and 1741 is a huge time gap, on this section of the line at least. The time in between can be used for exploring line 15 that connects the Metz-Thionville area to Dijon and further south. As is often the case in France, you have to be lucky though to see some interesting traffic.

So, after making no interesting photos on line 15 I ended up back along line 4, more precisely in Chaux-lès-Port, between Culmont-Chalindrey and Vésoul. As mentioned earlier, this section is still equipped with functioning telegraph poles. Train 1741 is pictured racing towards Belfort. 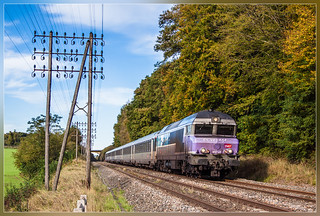 I had to pick up a friend after this photo, so unfortunately no more photos of the other trains. The sun was finally coming out from behind the clouds…

Finding a spot around Chaumont for the relatively early morning train 1742 to Paris is not easy, but we managed to find this side view at Villiers-le-Sec. 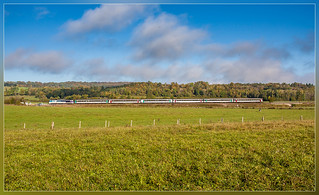 Again, action dies after the morning train. A visit to line 15 was a bit more productive than yesterday, but still… We were glad to back along line 4 for train 1741 to Belfort, which is seen here passing in Baulay. 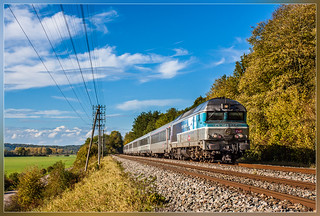 This must be one of the most famous locations between Culmont-Chalindrey and Vésoul. After passing at the supermarket in Jussey, we were enjoying cheese and bread in the sun on the little bridge waiting for train 1848 to Paris. 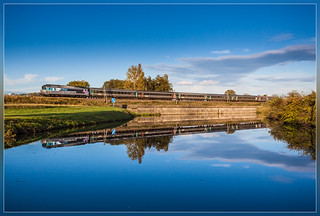 Same location from a different point of view. Train 1745 to Belfort turned into gold right in front of our lenses. 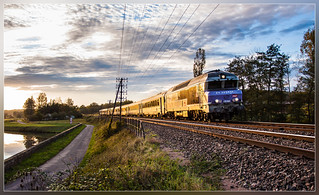 Weather forecasts for the coming days weren’t looking good, so we decided to follow the sun south, like all good tourists do. Hey, it’s vacation after all!

By the end of the week the weather in the north was looking better again, and that’s how we ended up along line 4 again by Friday night… ready for 2 more days.

On Saturday line 4 becomes, surprisingly, a bit more busy. Train 1742 is still the first train of the day to Paris, seen here along the cold Marne – Saône canal at Luzy-sur-Marne. 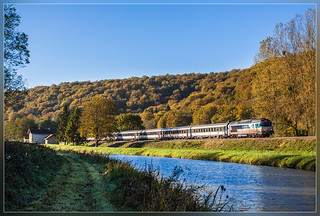 At Chaumont, above train and train 1643 to Belfort pass each other. At Luzy-sur-Marne, we made this shot only a few minutes after the previous one. 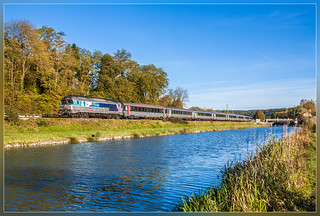 The gap between trains on a Saturday is much smaller than on weekdays. Intercités 1840 to Paris was next to be pictured. We chose the abandoned station of Vitrey-Vernois as the setting. 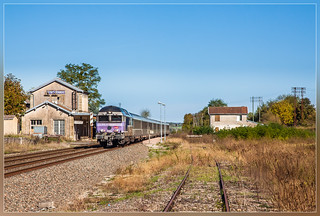 It must be noted that trains were riding on schedule during this visit. Except for train 1741 to Belfort, which was unfortunately involved in an accident with a person, close to Paris. So we took our time to wait for the next one. The station of Port-d’Atelier was one of the few locations closeby where the sun would still be well positioned.

One industry is still connected to this station, generating some freight traffic. 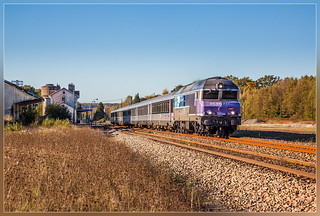 One last picture of the day was taken of train 1944 to Paris, in the fields close to Colombier. In the background, on the left, the town of Saulx can be distinguished. 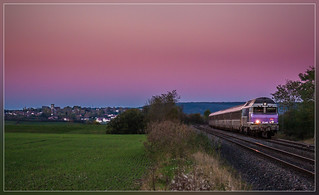 The last day of the trip… Sundays are also relatively good days, traffic-wise, on line 4. This must have something to do with university students commuting to Belfort and Paris. In order to be home at a decent time, we only stayed till noon, for the first 2 trains of the day.

The stretch of track right before entering the station of Vésoul is a good location for making a photo of the early 1742 to Paris. 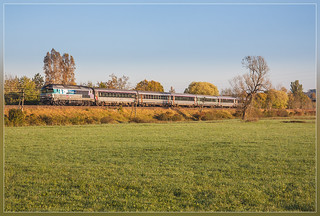 The last picture of the trip was made at the abandoned station of Genevreuille. The station is only in use for infrastructure purposes anymore, according to the pamphlet against one of the doors at least. It is located right next to a tunnel, which can be seen right behind train 1643 to Belfort. 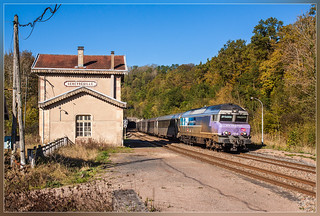 After this photo was made, the long trip back home started. Monday will be a regular working day again.